How Dangerous Are Big Cats? 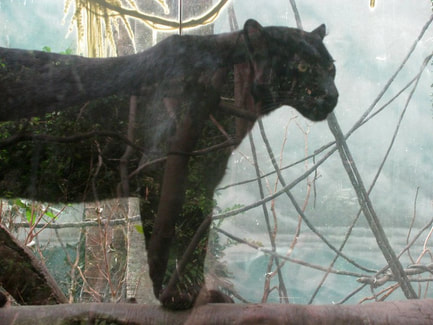 The two most commonly seen big cats in Great Britain, the black panther (black leopard) and the puma are both extremely dangerous animals and must be treated with the utmost respect. The power of these animals must not be underestimated.  There is no dog in Great Britain that would stand a chance against either of these two cats!

Most black panthers hunt during the night. They are masters of stalking and hide themselves amongst the undergrowth and surrounding terrain as they move towards their prey, creeping forward until they get close enough to strike. At this point they dash at their prey and leap on them grabbing them with their front paws and killing the victim, usually with a powerful bite to its neck. Black panthers also wait in tree branches for their prey to pass below and then drop on them, with the same fatal results. These cats are capable of carrying prey twice their weight up a tree to be eaten. Black panthers are far more likely to mount fatal attacks on people than pumas. They are fearsome animals indeed!

Pumas are formidable hunters too, most active at dusk and at dawn. Like black panthers, they stalk their prey, and then run at them and jump on them, sinking their teeth into their necks to kill them. Pumas can jump up to 18 feet into the air and can make horizontal leaps of up to 40 feet! They can run at speeds of up to 35 miles per hour, are excellent climbers and can even swim! Like black panthers they are capable of carry prey  much heavier than themselves in their mouths.

N.B. It must be pointed out that both pumas and black panthers can be active in daylight hours too. I have seen them in the daytime a number of times. Most attacks on dogs happen in the daytime. We must be on our guard. 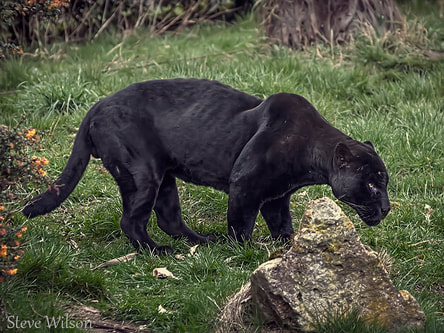 These fearsome big cats survive easily in the British countryside, keeping themselves to themselves in the main and feeding on such animals as deer, sheep, rabbits, wood pigeons and pheasants, though they have been known to attack cattle, horses, wild boar and without question, dogs and cats. No one must be in any doubt that both these big cats, but leopards especially, could attack humans too if given the chance in the right circumstances. I would never advise anyone to walk through woods alone at dusk or in the night or sleep out at night in woods and, indeed, we should all walk through wooded areas, deep valleys and ravines etc. with a degree of caution and awareness that just a few feet away there could be a big cat lurking in the undergrowth, behind a rock or even on a branch of a tree!

Look After Your Dogs

Big cats watch people and have been known to follow them through the undergrowth in broad daylight! If you have a dog it's best to keep it on a lead in woods too. Many people have reported losing their dogs in woods and it happens every year. It is probable that a number of them are taken by big cats and carried into the undergrowth.  Such is the strength and ferocity of these attacks it would be very unlikely that you would even hear the dog bark. I have spoken to a man who told me that he  saw a puma in a Devon wood whilst having a picnic with his family and his dog disappeared shortly afterwards the same day, never to be seen again! I found the spine and ribs of a dog in a wood in the same area where a man told me that one of his terriers had disappeared after running into a dense thicket with his other terrier! He searched for days for his dog but, sadly, never found it.

​Dog walkers I have chatted to have told me that their dogs have been terrified by something they have encountered in woods. One person has even told me that her dog came back to her shaking and trembling on one occasion when he ran ahead of her in a wood and on another occasion he was so terrified that he collapsed with fear in front of her!  A man I met whilst walking my dog told me that someone was exercising her dogs in a large and deep Devon wood and one of of them suddenly jumped off a high ridge in terror.  The owner was astonished to see this and was upset by what had happened although, thankfully, her dog survived. Someone else who was passing by said that he had glimpsed a large cat-like animal in the wood not long before this happened! Other dogs show their fear when they enter certain woods or walk on certain paths by their reluctance to go ahead. It would be wise to take notice of this kind of behaviour and even to consider not going any further. It's better to be safe than sorry!
​
Remember that dogs are very sensitive to danger and have an incredible sense of smell too! Please take special care when going through woods with your dog. You may save its life by doing so.

What About Wild Camping? 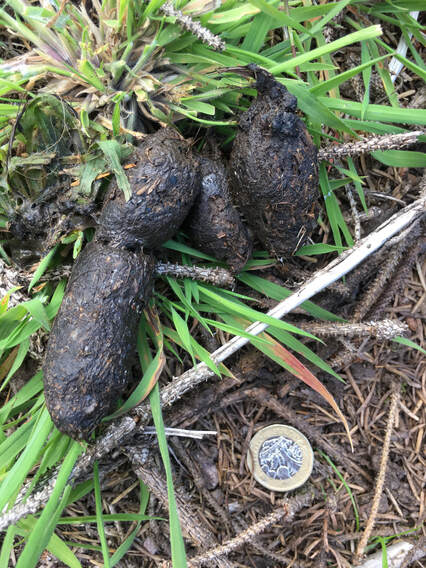 Some reading this might ask  the question, "Is wild camping safe?" Wild camping has become very popular in Great Britain.  I have a friend called Adam, who has been wild camping for a while with his friend and they have been going to some densely wooded areas. I arranged to go for a walk with Adam in his favourite forest in Somerset in the late Summer of 2021 so we could look for signs of big cats.  We found a few big cat scats on the paths and one of them, a leopard scat, was lying just a few yards away from their favourite camping spot! Let's just say that Adam has now lost his enthusiasm for wild camping!

Having said all of this, it appears that the vast majority of those who pursue this hobby have an enjoyable and safe experience.  The fact remains however that sleeping out in woods where big cats live remains a risky pursuit, especially if you are on your own.  Most people in Great Britain have absolutely no idea that big cats live in the British countryside. I'd rather people made an informed choice about wild camping. That's all.

A Word Of Warning 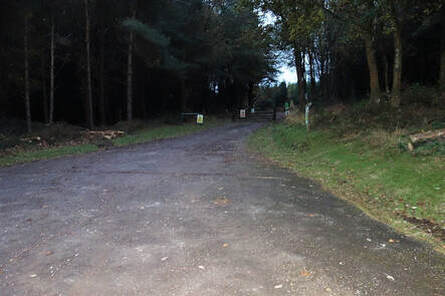 Having been stalked by a black panther on Christmas Eve 1985 on Croydon Hill in Somerset, I know the reality of the potential danger involved with having black panthers and pumas roaming freely in our countryside.  As I have already mentioned, black panthers are especially dangerous.  Whilst wanting to see our big cats live out their lives in the wild free from persecution, I also want people to know about the potential dangers associated with having them living in our countryside, for their own personal safety. Because of the lack of any kind of official public recognition of their existence in the wild in Great Britain it has been left to those who have seen big cats in the wild in Great Britain and their field signs to inform the public of their existence.  It's not always an easy road to tread, for various reasons, but someone has to do it. I think that those who know that big cats live in the wild in Great Britain actually have a moral responsibility to inform others of their existence, so they know what they might encounter on a walk through the countryside. More than once, when visiting woods to look for field signs, for instance, I have found fresh big cat scats moments before one or more people have entered those woods on a walk not long before dusk, just when I was about to leave! Fatal attacks on people by big cats in the wild in Great Britain DO happen but don't expect to see them publicised. Please be warned.

We all have to accept the fact that big cats live amongst us in Great Britain. This is the reality.  Don't have nightmares, enjoy the countryside but be AWARE that big cats could be THERE! ​

Below is a link to a tragic story that appeared in British newspapers in January 2022.  It certainly raises more questions than it answers and ​does seem to point quite strongly to possible big cat involvement. There are other suspicious newspaper reports that I could have included here too.
This tragic news report about a woman, whose 'mutilated' body was found one mile away from her car, near Monkton in Ayrshire, after calling the AA for breakdown service, certainly rings alarm bells.  It is highly unlikely and virtually unthinkable that any woman on her own would go wandering off across fields for a mile late at night, especially when  awaiting breakdown assistance. Perhaps she did, however.

The question is:  were foxes and badgers really to blame for the 'mutilation' described in the newspaper reports?  The answer is almost certainly no. Foxes and badgers are timid, especially ones living in the countryside, and are unused to seeing human bodies and would be very unlikely to even go anywhere near a body so soon after the person had passed away, let alone do what the newspaper articles suggest they may have done.

Did this poor lady really die from natural causes after walking one mile away from her car in the dark, the car that she was supposed to be staying with to await the arrival of the very people she had called for assistance, or is there an altogether different and far more sinister explanation?  Was she actually the victim of an attack by a big cat, by or very near her car?

There have been a number of big cat sightings in Ayrshire. If this lady got out of her car for any reason, a leopard could have easily crept up on her and then dragged her body one mile away across the fields to a 'safer' area away from the road. If this is actually what happened this would explain why she was found where she was found and why she was found as she was found.

It's telling that only three comments were allowed under this story in the Daily Mail. It's likely that quite a few of those who know about the big cats living in our countryside would have made comments and I know some such comments were made but none were allowed to be made public.

​One day there will be an inquest. If a leopard was involved in this tragic story will the public learn the facts? I suspect not. ​Whatever happened, surely the lady's family and the public do deserve to know the truth either way, however. The whole subject of big cats living in the British countryside needs to be brought out of the shadows and into the light. ​
Photos used under Creative Commons from edenpictures, Steve Wilson - over 10 million views Thanks !!, Tambako the Jaguar, Tambako the Jaguar Tambako the Jaguar